The Saturday Evening blog Post presents: The Day We Stared Down at the Clouds

October 20, 2013
It was 1987 and I was in my second year as a Chemistry teacher (yes I was the original Walter White, just without the meth cooking) in Salzburg, Austria. Now, those lucky readers who have visited Salzburg know that it is a spectacular city, steeped in history and blessed with natural beauty. It does have an Achilles heel, however, and I discovered this fact in October of that year. A trough of low pressure built up, and grey clouds scudded in, supplanting the blue skies we had been enjoying--just in time to greet my friend Bill who was flying in to visit me. But I wasn't worried, this had happened before, and the sun had always returned in a few days to dry up the trails for us to hike upon.

But not this year. This year the clouds hung up on the mountains and stayed put, and the rain came and went as if it owned the city. Bill and I, however, were not deterred--at least not for a few days. We balled soccer with my friends from school, played poker with the boys, visited every Bierhalle and Weinstube in the city and and even spent a day playing hackensack in a peat bog. I was so covered in this dark, foul-smelling peat that it took me a good solid half-hour to scrub it off in my shower when we were done, which speaks to the pathetic nature of my shower as well--to use the word 'dribble' would be exaggerating. When I got out of the shower I watched the weather forecast, learning that the clouds were going to sink even lower over the next few days. I was obviously dismayed, but Bill--who is a lot smarter than me--was overjoyed.

Why? Because the Wolkendecke (cloud ceiling) was 1500 meters, and the Untersberg (the mountain at the end of our street that looked like it had been thrust upwards by a subterranean being of mythical proportions--which, according to local legend, it had) soared 2000 meters into the alpine sky. Which all meant that after a week of the contrast of gray on gray, we could theoretically climb above the cloud cover.

The next day dawned damp and cold, but we readied our hiking gear and headed for the bus stop anyway. The 25 bus picked us up and dropped us off at the base of the mountain, a wall of rock climbable only with ladders and iron railings bored into the stone. It was raining when we started up the Dopplersteig, and the fog was so thick I could barely see the wet steps in front of me. About midway we were considering turning back, as the trail became especially steep at this point, traversing a sheer face with nothing on the right but 200 meters of cold Austrian air. But Bill wasn't going to be denied, and we pressed on, after paying our respects at the tomb stones marking this section of the trail. (The Dopplersteig is decorated with over thirty funeral cairns, honoring the Austrians who have fallen to their death while hiking--most likely on a slippery day like this.)

But we were nothing if not stupid, and we pressed upward into the swirling mist. Around the 1500 meter mark the sky started to lighten, and at 1700 meters a strangely familiar orange ball appeared in the sky. By the time we crested the barren summit, even the tops of the clouds were below us and we were bathed in brilliant sunshine. Now, this may not seem like a big deal to you, but after a week of fog so thick you could cut it with a knife, the clear, bright air felt good.

We passed the day hiking around the top, soaking up the sunshine and a few Stiegls, and generally enjoying life. But, October days are not noted for their length, and we had to face in to the wet climb down sooner or later, and I favored sooner, because I prefer to see where I am going. Bill snapped a photo of me taking one last look down at the clouds--it remains my favorite photo of all time--and off we went, plunging into the grey haze. Somehow, we managed to avoid being memorialized by another pair of stone funeral markers, arriving safely at the bottom several hours later in the gathering darkness. Bill flew home the next day, but the clouds remained in place for another few weeks, shutting out the sunshine and dampening everyone's mood--except for mine. I could still see the sunshine in my mind's eye, and feel its warmth on my face. 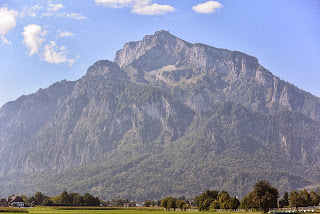 In fact, I still can.