October 06, 2013
The Canary Islands are a Spanish Archipelago about 100 kilometers west of Morocco. Why am I telling you this? Because it is there, in the northwest corner of Gran Canaria, that my travel companions, Bill and Chief--renamed el Hefe for the trip--and I found ourselves in May of 1988. If you read part 1 of this adventure, you will know that the vacation was a poorly thought out trip gone bad. Ok, poorly thought out is understating it; there was no thought involved. So, three days into our week, we find ourselves trapped in a tiny villa about a kilometer from the coast, on an arid, desert-like plain dotted with low-slung concrete buildings. The beach was out because we didn't have enough money to pay for one of the foxholes needed to get underneath the projectile-filled wind, and the nightclubs--in addition to being sketchy--were also too expensive.

As usual, however, el Hefe came to the rescue, by finding a book in the local library that alerted us to the fact we were only about thirty kilometers away from a lush national park atop a volcano. We only needed to get there. After a few hours of investigative work, we came up with four options: 1) tour bus, which we threw out straight off as too touristy(we were adventurers, not tourists) and too pricey; 2) hired car, (too much denero--we were broke, in case you weren't aware); 3) local bus, schedule too limiting, and 4) Mopeds, which was right up our alley. And cheap enough for us to rent for one day.

The next day we woke up early and headed down to the Moped shop, where birth was given to the original Sons of Anarchy: Bill, el Hefe, and Pete. We mounted up and headed south, happy to be putting Las Palmas in the rear-view mirror. The first ten kilometers threaded its way through the desert plain that comprised the entire west coast of Gran Canaria. And then we turned to the east and started climbing up the volcano. If you are wondering when it is going to dawn on us that Mopeds are made for cruising along the--flat--beach and not ascending a volcano, the answer is not yet. No, we were blissfully unaware of this fact (hint: foreshadowing) as we went up, passing cave dwellings, exotic vegetation and indigenous people. The Sons of Anarchy were fired up. 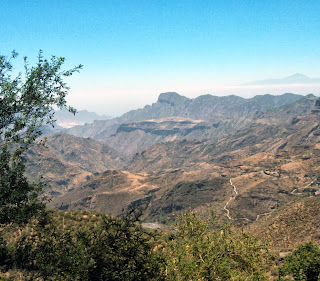 An hour later, after negotiating a series of switchbacks without the benefit of guardrails, we crested the peak at almost 2000 meters. Keeping in mind we had started at sea level, that's an impressive climb--for the mopeds, that is. We hiked around the top for a while, and then started down the back side, stopping at a real town where we gassed up and feasted on roasted chicken and hard cider. Yes sir, the Sons were living large, and we even enjoyed the admiration of some local boys who stood and stared. (At least I am assuming it was admiration.)

The problems began on the way down. Bill's bike started sputtering and fussing, and by the time we were near the bottom the darn thing quit entirely. Unfortunately, it was a desolate spot, and we could only chain the wounded stallion to a rock and take turns letting Bill ride piggy-back. And it worked great, until the road stopped falling down the mountain and started climbing again. It turned out that a single Moped could not carry two of us up a slope, leaving the three Sons of Anarchy on the wrong side of a simple math equation. Improvisation was in order, since none of us fancied the idea of hitchhiking back to Las Palmas, now over thirty kms away.

It was el Hefe's plan that saved us. Rather than retrace our path--where we would have to climb the backside of the volcano--we would keep going south toward the coast, and then take the flat coastal road all the way around the island back to Las Palmas. The only problem was the mountain range that lay in between us and the coast. There was only one thing to do, and Chief took the first leg, sprinting up the 30 degree grade like hellhounds were on his heels. He petered out in about two hundred meters, and gladly got back on his bike as Bill raced up the mountain, yelling like a rebel soldier on a charge. When he stopped, I gave him my bike and started sprinting, saving all my wind for my legs. After a hundred meters, my lungs were heaving like a bellows that hadn't been oiled in a year, and partially digested hard cider was refluxing into my mouth, but I refused to stop. I was going to pull my weight or die trying. And in this fashion we went up the mountain--in a sort of Pop-goes-the-Weasel fashion--each one of us taking a turn sprinting before we collapsed onto the moped.

I have never been so happy to reach the top of anything, but, even so, we were not out of the woods yet. Far from it, actually, as were now almost at the southern limit of the island--forty clicks away from home--and the light was beginning to wain.

I will end here, and finish up with part 3 next week. Thanks again for your patience and support; see you next Sunday.