The Saturday Evening Post presents: One Night in Boston (unlike any other in 100 years.) #bostonstrong 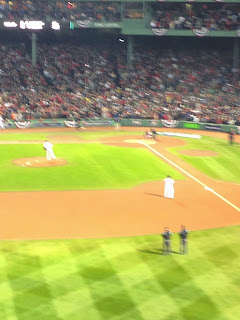 When I look back on it--three days later--the St. Louis Cardinals never really had a chance. It wasn't one particular thing, like the pitching of John Lackey--good though he was--but a combination of factors, almost all the kind of intangible ones never to show up in a box score. The first sign was the national anthem, sung by the Drop Kick Murphy's wearing Red Sox uniforms and kilts. When they finished that and started singing "Shipping up to Boston," the crowd went ballistic, and I could smell history in the making--as well as hot dogs, missing the performance as I did waiting in line to spend twenty bucks on two Fenway franks. By the time I worked my way back to where my son was standing atop the #GreenMonsta, I was treated with the sight of Luis Tiant throwing the first pitch to Carlton Fisk. The last time those two played together it was Game 6 of the 1975 World Series, a game in which Fisk hit the most iconic home run in Fenway history--until Steven Drew hit his in the fourth inning. (For Steven Drew to make contact with the ball--much less hit a home run--is worthy of history.)

Now, I am a big believer in home field advantage and karma and all that, but this seemed almost unfair. (Did I say unfair? I'm sorry, I meant unfahhh.) The red birds may well have been--and probably are--the better team, but the Sox had so much more. Mike Matheny starts Michael Wacha, the rookie phenom, and the Sox counter by not shaving since the advent of Spring Training--in March. Advantage bearded ones: pitching is good, but beards are better.

And, no, I am not saying the Sox aren't a good team, they are. But this World Series was won by Johnny Pesky as much as by David Ortiz, by Pedro Martinez as much as Jon Lester, by Ted Williams as much as Dustin Pedroia. Karma was the MVP of this series. What do I mean? Look at the box score. The Six didn't hit well, but they hit when they needed to. Shane Victorino had very few hits, but his Grand Slam and his 2-out, bases loaded double in Game 6 (which hit the wall right underneath me) prove that winning is about coming up big at the right moment. That's Karma, or chemistry, or beards; call it what you want, the 2013 Red Sox had it.

As a fan, standing in the midst of it all, I felt like history was the bride and the baseball game the--less pretty--maid of honor. One couldn't help but think of the Boston Marathon tragedy, the Boston Tea Party, and the Boston Massacre. Michael Wacha must have felt like he was pitching to Paul Revere (who is almost as old as David Ortiz.) When Koji struck out Matt Carpenter to end the game, no one headed for the exits--not even when Bud Selig started speaking. It was as if the game was just starting. It wasn't really a baseball game after all, it was a night in Boston unlike any other in 100 years. This was a win for the ages, for history, for a beleaguered city.

And my son and I were just happy to be a part of it.
#redsox #worldseries #Beardnation #history