Under the Cold January Sun: a short story by Peter Hogenkamp and an original painting by Peter Huntoon, on the Saturday Evening blog Post, Edition #14. 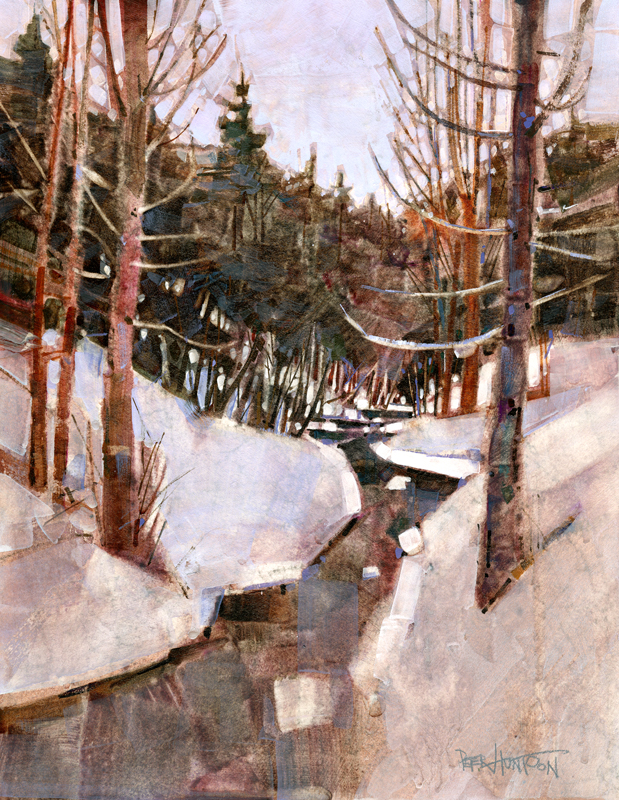 It was about ten years ago and we were in the middle of arctic front that lasted about eight days. From what I can remember, there were three days when the temperature never got above -10 degrees. Now, you smart people out there will realize this would be a good time to hunker down by the wood stove and settle in to a good book. But I was young (still less than 40) and foolish (those of you who know me well will have no trouble believing that.) And so I snowshoed up the second highest mountain in Vermont that day, Killington Peak, when the temperature at the base was -12 degrees Fahrenheit, and the summit was -20 and whipped by a COLD wind.

In the following years I have thought much about that day, and when the quintessential Vermont artist Peter Huntoon asked me to write a short story for his website, that day under the cold January sun came right to mind. I have always loved paradoxes, and the idea that the sun (which is 27 million degrees F at its core--although only a cool 10 million F at the surface) could be cold appealed to me greatly. But I can assure you it was a very cold sun staring at me on that day 10 years ago.

So, here's the story on which Peter based his painting. I have fictionalized it slightly--I don't own a truck and my snowshoes were made of plastic and aircraft-grade aluminum--but, for the most part, it's entirely accurate. Hope you enjoy it.

Under the Cold January Sun


I hope you enjoyed the story and I am sure you enjoyed the painting. For those visiting my blog, please check out my website (link on the sidebar) and sign up for my blog. I can also be found on #wattpad, where I am writing a serialized novel about the life of a medical intern (called, imaginatively, The Intern). Please click on the link and check it out. (My mother has given it a good review!) The Intern.

My first book, Absolution, the first book of The Jesuit thriller series, is currently being shopped to publishers and my agent tells me it should--with any luck--be available sometime in 2015. And thanks again to Peter Huntoon. I appreciate the opportunity and I love the painting. If you want the chance to bid on the painting, or check out some of Peter's other original artwork, here is his WEBSITE.

Thanks for your support, peter
#PeterHuntoon #watercolor #Vermont #art #landscape