In the Wake of the Storm: Tortola after Hurricane Irma.

March 02, 2018
On September 6, 2017, Hurricane Irma--the strongest Atlantic hurricane ever to make landfall--battered Tortola with 215 mile per winds. Six months later, my family and I flew down to see how Tortola and the other 'Nature's Little Secrets' of the British Virgin Islands had fared. 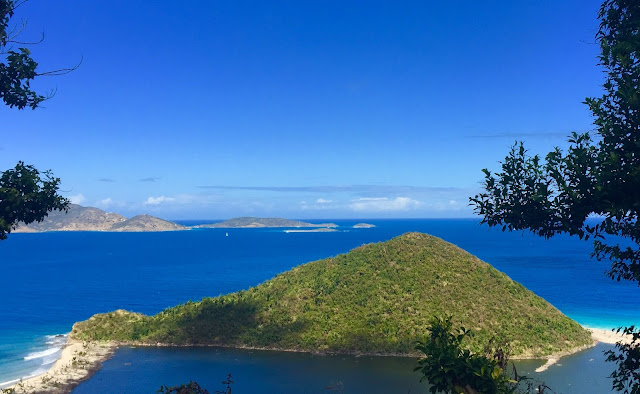 Look in one direction (above) and it's hard to believe a catergory 5 hurricane devatastated Tortola less than six months ago. Look in the other direction (below) and it isn't. 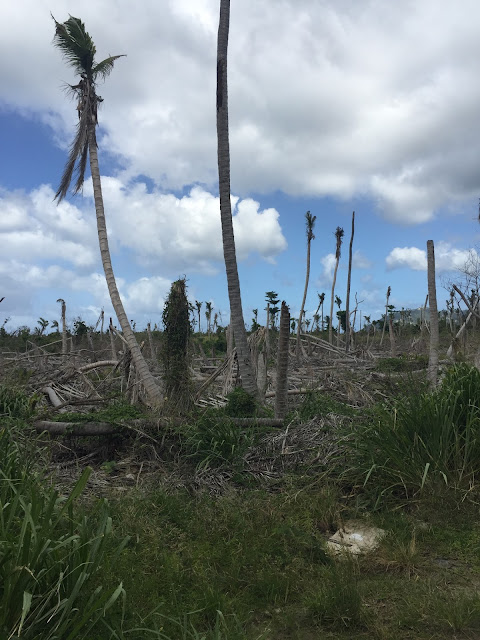 220 mile an hour sustained winds were hard on this palm grove. 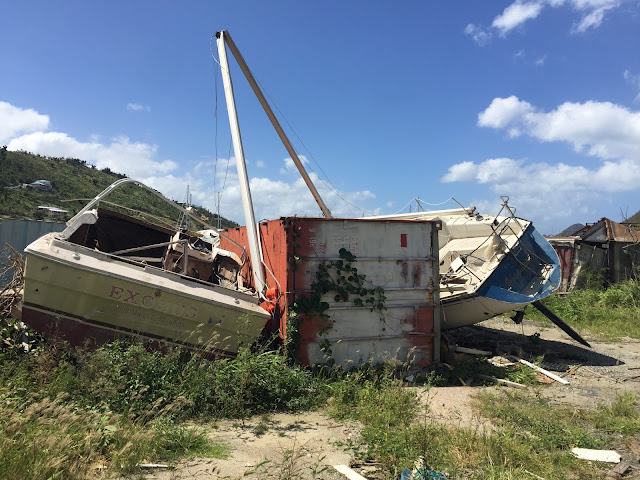 Neither motor boat nor monohull was spared from the tidal surge that stacked the boats at Soper's Hole up like plastic toys. 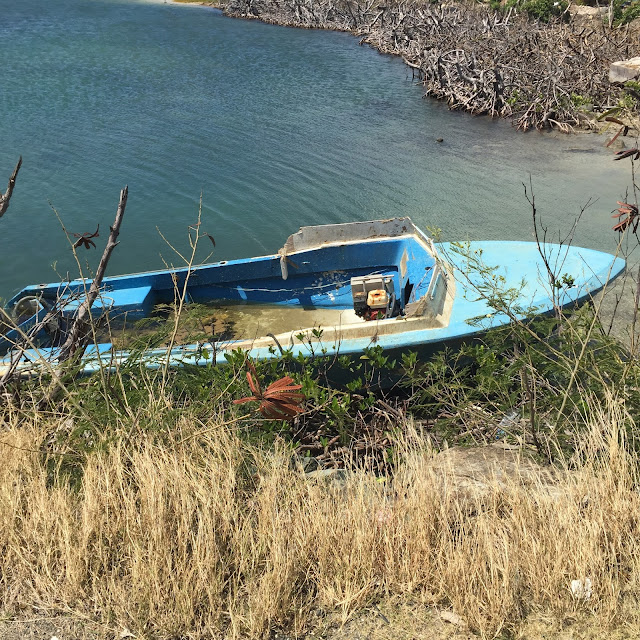 Since the mangroves were decimated, a school of minnows is using this inboard boat for protection. Nature is clever. 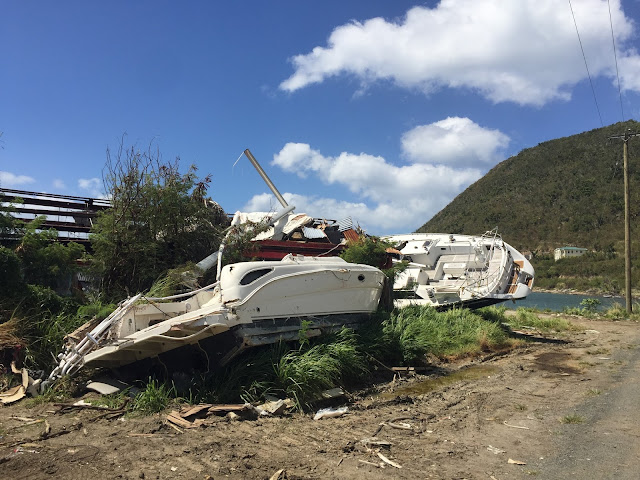 If you are trying to calculate the cost of this storm, this 28 foot inboard boat goes for about three hundred thousand dollars; it's a total loss, and there are hundreds more like it. And that doesn't include the cost to replace: the countless roofs which blew away in the wind (most not repaired yet); tens of thousands of windows (plastic and duct tape in their stead) blown out; legions of crumpled cars (almost all still sitting in the same spot); and the list goes on. 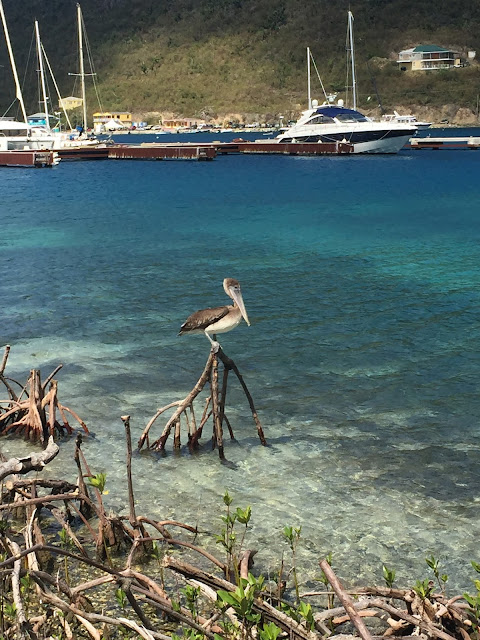 This pelican doesn't seem to be perturbed by the loss of the magroves, but the water quality will suffer, as mangroves clarify the water by trapping sediment and filtering pollutants. Their strong root system is also a major buffer against erosion. 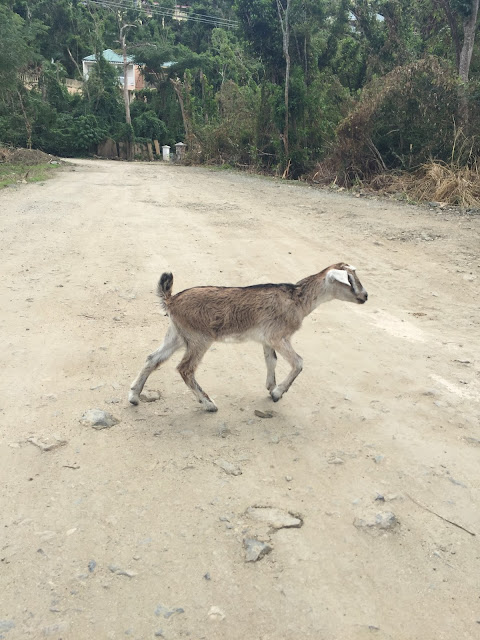 The hurricane was hard on the island's feral goats. This one--a kid named Betty--followed me around for a few hundred yards until we found the man who raised her by feeding her bottles of cow's milk after her mother died. 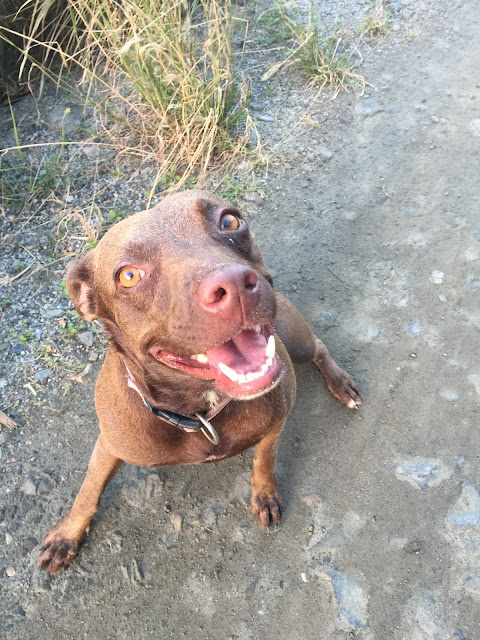 Fluffy, as the locals called her, followed me around on my hikes all week. Like all the other locals, she was happy and carefree despite the destruction of her island. I hope she's doing alright. 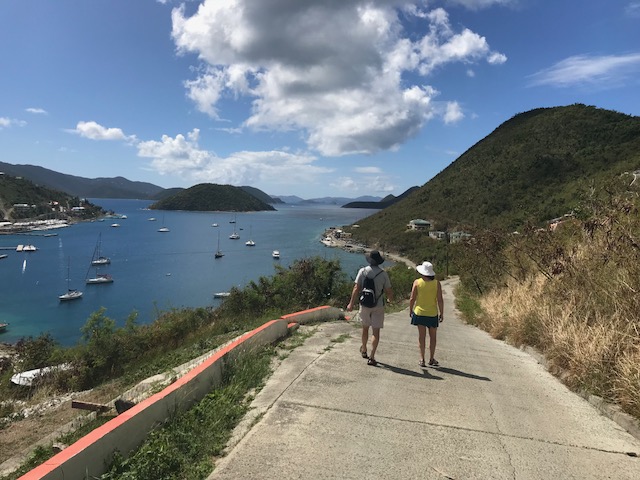 My wife and I walking down the mountain to Soper's Hole to get breakfast at D' Best Cup Coffee Shop. 1200 feet elevation and 2.5 miles--in both directions--but well worth it for a great breakfast and... you guessed it, the best cup of coffee in the BVI.

Want to help Tortola or the BVI? Go there on vacation and spend money. Rent a car, charter a sailboat, stay in a villa, go out to dinner at one of the fabulous resteraunts. Toursim accounts for approximately 95% of Tortola's economy. Tortola remains beautiful despite the destruction, and you can help get Tortola back on her feet.